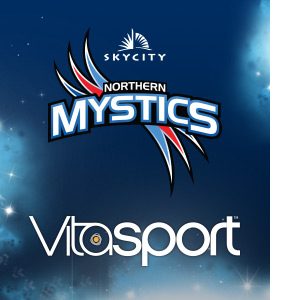 Vitasport is a specially formulated isotonic sports and lifestyle drink containing electrolytes which restore levels of essential minerals and provide carbohydrates to help enhance performance. The brand is already associated with a number of high performance athletes.

“It’s heartening to have another strong, New Zealand corporate brand rightfully backing women’s sport and I commend the company for seizing a great opportunity. But it’s mutually beneficial because the Vitasport brand, in turn, will be superbly exposed to consumers at all levels of the game.”

The Vitasport brand will appear on the SKYCITY Mystics’ new dress design, launched earlier this month, as well as their training gear and drink bottles.

Vitasport Brand Manager, Jane Bennett, says Hansells is not only proud to be tangibly supporting high level women’s sport but is also delighted with the opportunity to be involved with community netball at a grassroots level throughout New Zealand.

“We have plans to work with community centres in the wider Auckland region, as well as nationally in the longer term. With access to 45,000 players in the Northern region, and all the coaches, administrators, friends, family and supporters, we are confident, via our Vitasport brand, that we have a real chance to make a difference beyond the sponsorship dollars.”