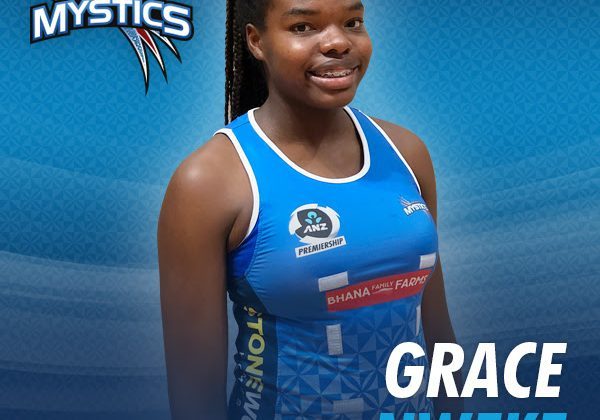 The Northern Mystics have added schoolgirl Grace Nweke to their full-time playing squad for the remainder of the ANZ Premiership.

The Avondale College student and 1.93m tall goal shoot will turn her full focus to the Mystics having previously split her netball workload between the BEKO Netball League, where she was part of the Northern Marvels, and the ANZ Premiership.

Nweke, who was born in New Zealand and is of Nigerian descent, has grabbed the spotlight with her shooting accuracy, temperament and athletic ability on court.

The talented former high jumper only turned 17 in February and still has a full year left at secondary school – something the Mystics management was mindful of when including the teenager in their squad.

Mystics coach Helene Wilson said she was pleased to see Nweke officially join the ANZ Premiership but would still be wary of managing the youngster’s workload.

“Grace has been a training partner with us and of course made an impact on court in the ANZ Premiership over the past few weeks,” Wilson said.

“She knows our set-up, the players and is coming to grips with what is expected at this elite level.

“There is no doubt that Grace is an exciting prospect for both the Mystics and New Zealand netball, but we also need to be mindful that she is still very new to the high performance environment.”

Nweke has so far put up 166 attempts at goal in the 180 minutes she has played to date with an 83 percent accuracy, showing plenty of maturity against some of the best defenders in the country including Silver Ferns Casey Kopua and Kelly Jury most recently in Round 6.

“Finding the right balance for Grace is very important to the Mystics because she is certainly a player to watch for the future. And she still wants to have fun out there,” Wilson said.