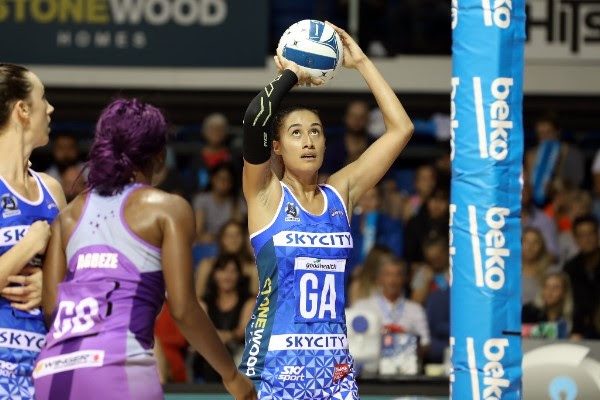 As the Northern Mystics look forward to the 2019 ANZ Premiership season we will go into the competition without a familiar face in Maria Folau.

One of the most influential long-range shooters in netball, Maria made her debut with the Northern Mystics in 2010 and has remained a mainstay of the franchise for the past nine seasons. Managing through two International events in two years and playing in the 2018 ANZ Premiership has been tough. With her family and life now based in Australia, Maria has made the decision that she can no longer commit to the full training schedule required for the ANZ Premiership so the decision to not be available for the 2019 playing season has been made.

Folau has been involved in our sport nationally from the age of 17 and her on court availability to set up attacking play as well as her accurate shot from long range sets her apart from other shooters. An athlete who has always had on-court presence, Maria has grown in excellence over the years, both on and off the court. She is considered by her peers as a leader and by her opponents as a world class long range shooter.

Reflecting on the next chapter in her life, after her marriage to Israel Folau last November, Maria has made the decision to move forward with other aspects of her life and that will result in her no longer being able to play with the Northern Mystics.  “I’ve experienced many unbelievable highs and many opportunities for growth in my netball journey over the past nine years with the Northern Mystics and I’ve loved the opportunity to play with my teammates, enjoy the successes with our fans, sponsors and supporters and hope that I have inspired the next generation of netballers”.

“This has been one of the hardest decisions I’ve ever had to make, I consider the Northern Mystics my netball family and this club will always hold a special place in my heart, but I feel the time is right for me to make a full time move to my new home in Sydney. My life and my family are now based outside of New Zealand, so my support networks have also shifted across the Tasman”.

Northern Mystics CEO, Nicole Spratt says “I have seen the challenges Maria has endured this season to juggle her new-found family life with her netball career and can only thank Maria for the love and commitment she has invested into our franchise and our game over such a long period of time. There are many players, coaches & staff who would have a great story to tell of Maria’s influence on them throughout her career and we thank her for all that she has given and shared”.

Head Coach, Helene Wilson has nothing but praise for Maria who has made a huge impact within the Northern Mystics environment.

“I have enjoyed watching Maria’s netball journey over the years – growing into one of NZ’s most iconic GA’s. I am humbled to have worked with such a highly respected and influential person not only in the netball community but for all young woman in NZ. The passion and dedication she has brought to our team is special and she has been a pleasure to coach. We will miss her in our team, but she will always be a part of the Northern Mystics family and we wish her all the very best with her new in life Australia”.