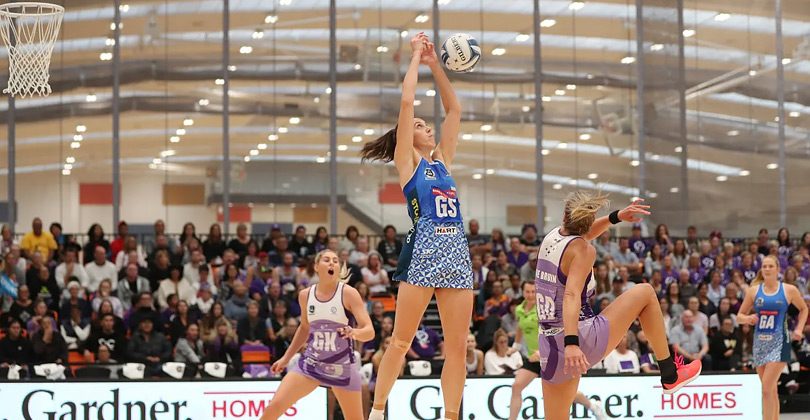 It’s taken a year for seasoned Silver Fern and Mystics shooter Bailey Mes to overcome a stubborn knee injury, but she’s ready to take on the netball world again.

Turn back the clock just a tick over a year – and the last netball game Bailey Mes played.

The dynamic shooter, a veteran of 70 tests for New Zealand, was at the top of her game. She’d come on for the second half of the Silver Ferns’ opening test of the Nations Cup against England in Birmingham, and her stunning performance with Maia Wilson in the Ferns’ victory earned Mes the honour of player of the match.

But something was wrong. With five minutes to go, Mes felt a strange pain in her left knee as she ran across the court. Oddly, it was her strapped right knee that had been giving her grief on that tour.

“I still don’t know what happened. I’ve looked at the videos so many times but there didn’t seem to be any event. It must have been a take-off or a landing.”

Mes didn’t play again in that Ferns’ series win in January 2020, following on from their shock World Cup victory. She was “nursing a niggle”, the newspapers read. And she hasn’t played since.

It would take a few months before specialists got to the bottom of the problem. Mes had a patella cartilage injury – not uncommon in netballers – but her recovery from surgery would be particularly slow.

And it would take almost a year before she could run properly again. Fortunately, it turned out to be a year in which Mes could afford to take it slowly and carefully.

What drove her through the hard times? “I didn’t want to finish on that note,” the 31-year-old says.

“I’d never missed an ANZ season. Even when I did my ACL [in the same knee in 2013], my recovery was through the off-season.

“And I didn’t want my career with the Silver Ferns to end with just 30 minutes of a series. Especially because I was at the point where I felt I was going well and I’d reached a good place with everything.

“Hopefully it won’t end on that.”

Mes could have the chance to remedy that in a fortnight when the Silver Ferns finally meet Australia again in the Constellation Cup, with all four tests to be played in New Zealand.

Although she’s had a rollercoaster international career, Mes remained in the Silver Ferns squad right through her recovery. It’s meant having access to all the Ferns support services, like physio and strength and conditioning.

“I never expect anything nowadays, but I was so very grateful to stay in the squad,” she says. “I obviously made it clear that I wanted to come back, and I was happy with how I was playing before that.”

Silver Ferns coach Dame Noeline Taurua will name her side of 12 for the series against Australia next week. (The Diamonds began their 14 days of quarantine in Christchurch on Monday).

Mes impressed Taurua at the first Silver Ferns camp of the year, passing the demanding fitness testing with flying colours – while five others in the squad of 26 were sent home.

“It’s been over a year since Bailey’s played, and to see her actually out on court and smash our fitness testing has not only been heartening for us, but the rest of the squad as well,” Dame Noeline told Newshub at the Wellington camp.

“I think she’s one of the positive things to have come out [of camp].”

Mes, who’s primed to play in her 11th ANZ season with the Northern Mystics, says she’s ready for the challenge.

“There was never any doubt that I’d get back on court. It was just a matter of ‘when’.”

Mes was scheduled to undergo surgery at the end of March – but that turned out to be the first week of New Zealand’s Level 4 lockdown. She had to wait another five weeks for her operation.

Her rehabilitation has been frustrating, she says. “It’s just been so slow. It was the nature of my injury; I had a bit of swelling that wouldn’t go down that was an issue.

“I was never going to be ready for the Silver Ferns series in October [against the NZ Men and England] so it meant I could use the last three months of the year to take my time.

“Around month six I could run again, but even that was a long process. I had to work through the discomfort in the end. Then in December I did a session and it felt way more better than it had.

“That was a turning point – suddenly I was away. But it took a whole year to get there.”

The break from the court meant she could concentrate on her work with the sports imagery team at Sky. “It was great because it made the days go faster.”

Rehabilitation can be a lonely journey, especially during two lockdowns, but Mes was fortunate to live in a flat with Black Cap Jimmy Neesham and former Magic defender, and nurse, Alex Macleod Smith. Like many Kiwi households, they turned their garage into a lockdown gym.

Mes also had a rehab buddy alongside her in Ferns and Mystics team-mate Michaela Sokolich-Beatson.

Sokolich-Beatson snapped her right Achilles in England, a few days before Mes hurt her knee, so the pair worked on their fitness together – especially the dreaded upper body work-out.

“We kept each other going,” Mes says.

t wasn’t easy with the Mystics playing in the revised ANZ Premiership, and two of their most experienced players unable to be part of it with Covid limits.

So they focused on working with the Silver Ferns physio, Mark Overington, at the Millennium Institute on Auckland’s North Shore.

“We did a lot of upper body workout sessions together and spent lots of time on the grinder. It’s the worst,” Mes says. “I hate upper body training. So, having someone else there to feel that pain with you makes a huge difference.”

Mes was “extra heartbroken” for Sokolich-Beatson when she ruptured her other Achilles in October, just three weeks after she returned to the court. It means she won’t play for the Mystics again this season, but she will be courtside.

“She’s so energetic and positive, and everyone feeds off that in the team. It will be great having her voice – even if it’s from the sideline,” Mes says. “But we need to make sure she’s getting what she needs as well, because being involved and not getting game time can be super-draining at times.”

Mystics coach Helene Wilson is thrilled to have both international players back in the mix.

“It’s just so nice to have Bailey’s experience of what she does and what she knows. She brings a deeper layer of experience and knowledge to our team talks,” Wilson says. “And the way she shares it with the others – especially the young shooters around her – they really look up to her.”

Mes, who’s played 93 games in ANZ competition history, will play next to Grace Nweke, Saviour Tui and Filda Vui in the shooting circle this year – three young shooters who all stepped up for the Mystics last season.

“They were so awesome last year, everyone just got on with it,” Mes says. The Mystics finished third last season, and have retained almost all of that squad, adding Northern Stars players Fa’amu Ioane and Kate Burley.

hey also have a new assistant coach, with Australian Rob Wright – of the Collingwood Magpies and the NSW Swifts fame – zooming in to trainings via a laptop on the side of the court. Mes is enjoying having a different voice and view on the game.

But what she really needs now is game time. “Honestly, I just want to play another season. This is the longest I’ve had away from the game since I started playing,” she says.

She still has work to do on her troublesome knees, which tend to flare up with the jumping she does at goal shoot.

“There are a few things I’ll be doing forever to keep the muscles there, like single leg strength,” she says.

“I’ve noticed in my rehab if I loosen off on that, the pain increases and there will be those things I’ll have to keep on top of. Loading is just an ongoing management thing – so if I have a big day, I may have to have a lighter day the next.

“But I shouldn’t have to change anything too drastically. At this stage of my career, it’s a ‘smarter not harder’ approach.”

So could this be Mes’ final season? “I don’t want to put a timetable on anything. There’s no reason to call time yet. I just want to get back out there and play some netball.”